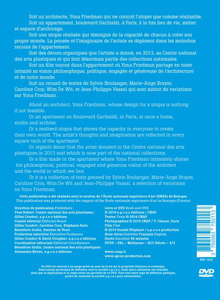 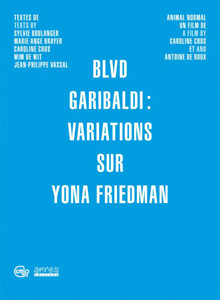 order
wishlist
Box set including a book and a film on DVD.
About an architect, Yona Friedman, whose design for a utopia is nothing if not feasible.
Or an apartment on Boulevard Garibaldi, in Paris, at once a home, studio and archive where the artist's thoughts and imagination are reflected.
Or a realised utopia that shows the capacity in everyone to create their own world.
Or organic décor that the artist donated to the Centre national des arts plastiques in 2013 and which is now part of the national collections.
Or a film made in the apartment where Yona Friedman intimately shares his philosophical, political, engaged and generous vision of the architectand the world in which we live.
Or it is a collection of texts penned by Sylvie Boulanger, Marie-Ange Brayer, Caroline Cros, Wim de Wit and Jean-Philippe Vassal, a selection of variations on Yona Friedman.

The film “Animal normal” recounts the intimist conversation that Yona Friedman began with Caroline Cros and Antoine de Roux in 2007. Filmed in his apartment on Boulevard Garibaldi, probably his greatest visual masterpiece, Friedman shares with us his generous theory that posits that the individual can become the agent of improving their environment. Drawing on references as diverse as analytical or holistic thinking, cooking, natural laws, canine sensitivity, graffiti art and even ancient building practices, he conveys a vision of the world and of architecture in which improvisation, education, asymmetry, communication, creativity, immateriality and mobility are the vehicles of freedom. The interviews are punctuated and enriched by filmed sequences of the artist in action and old and recent artworks.
Caroline Cros is heritage curator and teacher of contemporary art at the École du Louvre in Paris (France). She has curated several exhibitions on Yona Friedman.
Photographer, director and producer Antoine de Roux films artists at work.
Yona Friedman (1923-2020) has since the middle of the 20th century been developing the concept of “mobile architecture” according to which housing and town planning should be conceived by their users and should integrate the unpredictability of future behaviour of the user.
order wishlist
Edited by Gilles Coudert and Bénédicte Godin.
Texts by Sylvie Boulanger, Marie-Ange Brayer, Caroline Cros, Wim de Wit, Jean-Philippe Vassal.
Film directed by Caroline Cros and Antoine de Roux.
published in January 2015
bilingual edition (English / French), DVD in original version with English / french subtitles
14 x 19 cm (softcover)
120 pages (color & b/w ill.), video DVD 48'
20.00 €
ISBN : 979-10-91490-15-3
EAN : 9791091490153
in stock
view video sample
http://www.lespressesdureel.com/VIDEO/apres/3619.mp4
press releases
Critique d'art, Phoebe Clarke, 2015 (PDF)