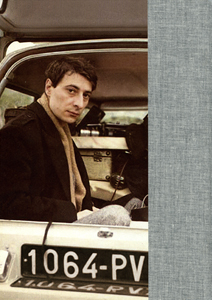 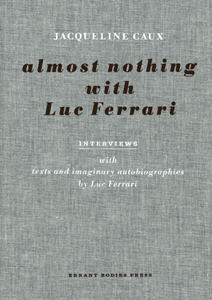 wishlist
Interviews with texts and imaginary autobiographies by Luc Ferrari: the first book to offer a comprehensive and insightful look into the work and career of one the most pioneering music composers of the second half of the 20th century.
True to the genre-defying career of Luc Ferrari, who passed away in 2005 at the age of 76, the book skilfully assembles original interviews conducted by the author with previously unpublished texts in which the composer reflects on some of his key works. The interviews are also interspersed with fourteen short "imaginary autobiographies", written from 1971 to 1997, and ranging from semi-factual accounts to more poetic, fictional, or even science-fictional pieces.
In her illuminating introduction, Jacqueline Caux starts by recounting some of the main achievements of this most libertarian, anti-dogmatic of artists, before identifying three constants throughout Ferrari's tumultuous career: his passionate attention to the sounds of everyday life, his compositional use of chance and his emphasis on themes of intimacy and sensuality. In the first and more substantial chapter (History), musicologist François Delalande, composer Daniel Terrugi and musicologist Evelyne Gayou join the author to take Luc Ferrarithrough his musical life, starting with his early years studying piano at the Conservatoire de Paris, where his teachers included Arthur Honegger and Olivier Messiaen. Tracing back his first encounter with fellow musique concrète pioneers Pierre Schaeffer and Pierre Henry, with which he would found the influential Groupe de Recherche Musicale (GRM), Ferrari offers a personal and richly evocative account of one of the most effervescent periods in modern music, culminating in the 1958 Brussels World's Fair and the official recognition of a new generation of experimental composers: Varèse, Cage, Xenakis, Stockhausen. Another major shift in his career occurs with his discovery of the use of unprocessed everyday sounds, leading to what is perhaps his most famous work, Presque Rien (1969). This compositional strategy, for which he coined the characteristically understated term "anecdotal music", allowed him to bring the social into the musical vocabulary – a radical artistic move appropriate for these politically radical times. Chapter Two to Five successively address Ferrari's involvement in a variety of mediums, from instrumental composition and music theater, to radio art and even installation art. In the final chapter (Concepts), Jacqueline Caux asks the composer to elaborate on some of the key concepts that have guided his work: anecdotal, autobiography, chance, heterogeneity, heterozygote, freedom, narration, tautology, etc. The book concludes with the complete list of his works as well as discography.
See also Luc Ferrari; Luc & Brunhild Ferrari.
wishlist
Translated from the French by Jérôme Hansen (original title: Presque rien avec Luc Ferrari, Main d'œuvre, 2002).
published in February 2013
English edition
16 x 21,5 cm (hardcover, cloth binding)
176 pages (b/w ill.)
ISBN : 978-0-9827439-1-1
EAN : 9780982743911
sold out