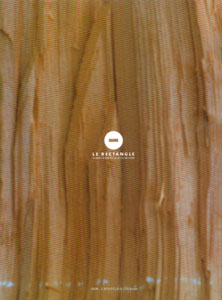 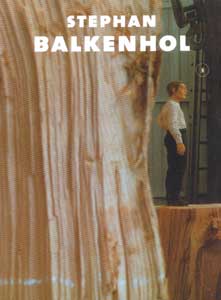 order
A series of scupltures realized by Stephan Balkenhol in 2003.
This publication deals with a set of works produced by Stephan Balkenhol between January and April 2003 : some twenty-five new personages, both men and women, ready to take on the feelings, lives and identities that will be ascribed to them by those who make their acquaintance.
These personages, sculpted in wood and painted with acrylics, are of a piece with their plinths, in a constitutive association. The treatment is rough abd ready, the rapidity of execution obvious. Tool marks, accidents and the jaggedness of the surface are visible.
Deaf and dumb, they represent nobody in particular. They wear ordinary clothes and are frozen in mundane postures that rule out any expressionist dimension. Most often upright, they are of varying sizes, but always either smaller or larger than normal so as to « clearly establish a space for the imaginary ».
The human figure is used in Stephan Balkenhol's work for its universal and immediately identifiable character, as a simple « possibility of a form of spontaneous recognition of sense », which means that it leaves room for the physical experience of sculpture, and the individual, intimate perception of the viewer.
By inviting us to take over a space that has been left empty, Balkenhol's « silent figures » disconcert us and invite us to think about our behaviour and attitudes, to reconsider the way we look at others and ourselves. Enigmatic and secret, they give us a glimpse of the imaginary, subjective, fictional character of our relationship to the world and its representations.
What can be said of Balkenhol's works, in any case, is that they do not seek to impose anything on us, or to add anything. On the contrary, they offer us the rare opportunity of respite, and of remaining at arm's length from the principle of exhibition and transparency which seems to be achieving ever-greater domination of the contemporary world.

Laurent Godin
German artist Stephan Balkenhol (born 1957 in Fritzlar, lives and works between Karlsruhe, Germany, and Meisenthal, France) has been producing polychrome wooden sculptures since the 1980's human or animal figures, sometimes hybrid, men and women of today in simple poses, standing statues or portrait busts. By choosing to carve wood like an artisan and to bring forth realistic-looking figures, Balkenhol breaks with a certain tradition of abstract and minimal contemporary sculpture, and takes up a place apart in the current art scene.