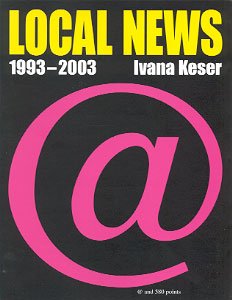 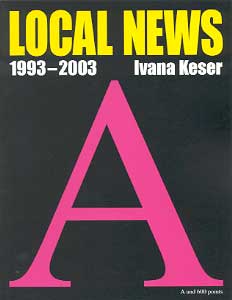 order
wishlist
Over more than a decade Ivana Keser has questioned the world of communication, and in particular the press. This book is the first monograph to be dedicated to the Croatian artist. It documents all the newspapers she published between 1993 and 2003 for each of her exhibitions, and which were distributed to the public free of charge. It also contains an extensive interview with the artist by Christophe Cherix, and a complete inventory of her œuvre.

“I was often invited to make shows with very small budgets. Little is needed to cover the expenses of a newspaper. Moreover, I was never interested in producing objects … I wanted to express my point of view, to point out contradictions, and to interact with people. I felt that the best way to communicate with the world was to send out news. Concerning distribution, it wasn't so often that you would get something for free in a show … And I don't mind if they toss them afterwards in the garbage … A glimpse at something, a title which provokes you and that you remember, an image affecting you is enough … No paper gets thrown away without having made some impression.” —Ivana Keser