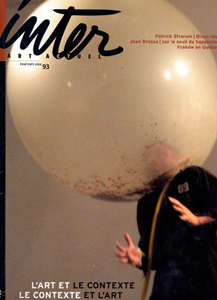 order
Art and context.
This important issue features contributions by authors whose practice is anchored in contextual art. As a testament to the range of activites and networks in which Le Lieu participates, Inter looks at an exchange that took place between the cities of Quebec and Krakow, commenting on the work of Krakovian artists in Quebec City in September 2005.
Published by Editions Intervention (Quebec) three times a year since 1978, mostly in French with sometimes English and Spanish texts, Inter, art actuel is a cultural periodical disseminating various forms, praxis and strategies of contemporary art—performance, art action, installation, poetry, multimedia, etc.—while questioning the relationship between art, the social and the cultural, the politics and the ethics. With worldwide contributors, writers, artists, art critics, historians and philosophers, Inter, art actuel is the expression of resistance and a global point of view on arts and society.
order
published in 2006
French edition
23 x 30,5 cm (softcover)
96 pages (b/w ill.)
10.00 €
ISBN : 978-2-920500-83-9
EAN : 9782920500839
in stock