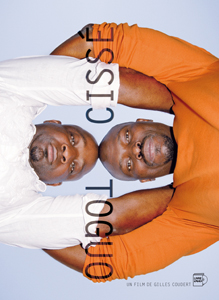 order
wishlist
A book / DVD documenting a collaborative project by Cameroonian artist Barthelemy Toguo and Senegalese Soly Cissé in Dakar.
In May and June 2010, the artists Barthelemy Toguo from Cameroon and Soly Cissé from Senegal were brought together for the first time on the African continent for an exhibit at the French Institute Gallery Le Manège in Dakar co-produced by the French Cultural Center in Yaoundé. This unique experience took place in the off-section of Dak'art, the 10th Dakar Biennal in 2010.
Beyond a simple comparison, several challenges rose: set up the physical encounter of two continental artists wha had only met in western art biennals, produce artworks with local craftsmen and companies, think of a scenography that would set a real dialogue between both artworks and, last, build up a strong relationship.
It's this whole adventure that this DVD-book tries to capture. By following step by step the setting of the exhibition, Gilles Coudert's films lets all the actors of this projects speak for themselves, the artists of course, but also the curator, the director of the Institute as well as the professors and the students of the Dakar School of Fine Arts who took part in this project.
Published following Dak'Art 2010 - 10th Biennial of Contemporary African Art, Dakar, Senegal.
The work of Barthelemy Toguo (born 1967 in Cameroon, lives and works between Paris and Bandjoun) is protean, colorful, multicultural, deeply committed, and based on a reflection on the destiny of the humanity, travels, and on the way the world is working.
Born 1969 in Senegal, Soly Cissé lives and works in Dakar.
order wishlist
Edited by Gilles Coudert.
Film directed by Gilles Coudert.
Texts by Florence Alexis, Delphine Calmettes, Alban Cordier-Labasse, Maureen Murphy, Ugochukwu-Smooth Nzewi, Philippe Piguet.
published in May 2011
bilingual edition (English / French) / DVD in French version (English subtitles)
15 x 21 cm (hardcover)
80 pages (color & b/w ill.), 33' video DVD
18.00 €
ISBN : 978-2-9528897-6-6
EAN : 9782952889766
in stock
table of contents