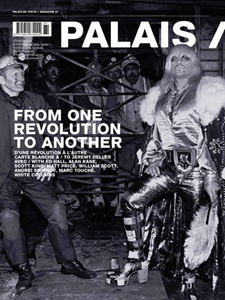 From One Revolution to Another / Jeremy Deller / Adrian Street / William Scott / Ed Hall / Experiments in sound and electronic music in early 20th-century Russia / exhibitions guide and a selection of books, music, movies, and events around From one Revolution to Another...
From the Industrial Revolution to the appearance of glam rock in England, by way of the electronic music in Soviet Union, the emergence of rock in France, the union banners of Ed Hall and the personal fictions of William Scott, From One Revolution to Another explores fields in the margins of contemporary art and questions possible relationships between industrial and cultural revolutions. At the boundaries of history, anthropology and contemporary art, the exhibition mingles collective and personal histories in a unique way. For his “carte blanche” at the Palais de Tokyo, British artist Jeremy Deller, enlisting the help of quite a few collaborators, has devised a project that defies categorization where the protagonists can escape being defined as artists and the objects presented are not always apprehended as works of art.
This issue of the magazine Palais / is edited and designed around this project, with a conservation with Jeremy Deller, an interview of the pro wrestler Adrian Sreet, an article about experiements in sound in Russia in the 1920s, several portfolios (Golf Drouot, William Scott, Folk Archive), a photo-report on Ed Hall's banners, and also a guide section.
Published twice a year, Palais magazine offers an in-depth perspective on the exhibitions and program of the Palais de Tokyo. Palais allows people to see contemporary art in a topical way, as often as possible from the point of view of the artists themselves. Each issue of the magazine includes dossiers, interviews, essays, special projects and inserts, all contributed by artists, art critics, historians or theorists, making Palais magazine an essential tool for apprehending contemporary art.
published in 2008
bilingual edition (English / French)
21 x 28 cm (softcover)
96 pages (color & b/w ill.)
ISBN : 978-2-84711-031-9
EAN : 9782847110319
sold out
table of contents