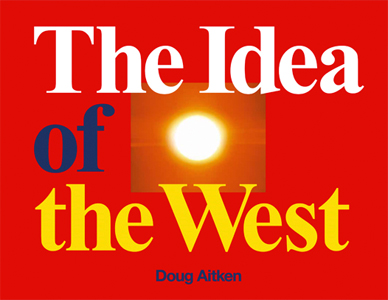 order
wishlist
A hybrid artist's book that reflects Aitken's expansive approach to art-making.
"Sunsets over the Pacific… Surfers… Movie stars… Coyotes in the street… Sex." Doug Aitken's "The Idea of the West" presents the collective response of 1000 people on the street who were asked "What is your idea of the West?" to create a manifesto from the quotes and comments of random individuals. Through an amazing assortment of over 200 color and black-and-white images juxtaposed with responses to this question, "The Idea of the West" takes the reader on a high-speed journey across space and time to trace the mythology of the New West.
In addition, the book also features conversational fragments by a host of creators based in the Pacific region, including Devendra Banhart, Bruce Brown, Charles Burnett, Exene Cervenka, Fallen Fruit, Simone Forti, Fritz Haeg, Miranda July, No Age, Raymond Pettibon, Rodarte, and Ryan Trecartin.
A hybrid artist's book that brings together elements from classic 1970s photobooks, agit-prop paperbacks, and music 'zines, "The Idea of the West" reflects Aitken's expansive approach to art-making. Known primarily for multi-screen video installations that function as immersive explorations of the experience of time and location, Aitken has also directed many live happenings.
Doug Aitken (born 1968 in Redondo Beach, California) lives and works in Los Angeles.
order wishlist
Edited by Doug Aitken, David Jacob Kramer, Kristine McKenna.
Texts by Doug Aitken, Dirk Dobke, Bettina Korek.
published in February 2011
English edition
28 x 21,8 cm (hardcover)
160 pages (126 color & 69 b/w ill.)
42.00 €
ISBN : 978-3-03764-180-4
EAN : 9783037641804
in stock