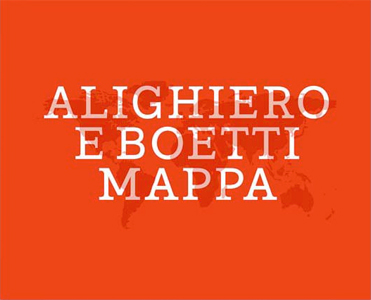 order
wishlist
Among Boetti's most famous works, the series of embroidered maps of the world, the "Mappa," were made from 1971 to his death in 1994. The maps delineate the political boundaries of the countries, with each of them being embroidered with the design of its national flag. Embroidered by artisans in Afghanistan and Pakistan, the maps were the result of a collaborative process which left the design to the geopolitical realities of the time, and the choice of colors to the artisans responsible for the embroidery.
This book gathers together maps from various periods. It is introduced with an essay by Jean-Christophe Ammann, who is currently working on Boetti's catalogue raisonné.
"For me the work of the embroidered 'Mappa' is the maximum of beauty. For that work I did nothing, chose nothing, in the sense that: the world is made as it is, not as I designed it, the flags are those that exist, and I did not design them; in short I did absolutely nothing; when the basic idea, the concept, emerges everything else requires no choosing."
—Alighiero e Boetti, 1974
Alighiero e Boetti (1940–1994) was an Italian conceptual artist, often associated with Arte Povera.
order wishlist
Edited by Anna Fisher.
Text by Jean-Christophe Ammann.
published in June 2010
bilingual edition (English / Italian)
29,2 x 23,8 cm (hardcover)
92 pages (34 color ill.)
32.00 €
ISBN : 978-3-03764-107-1
EAN : 9783037641071
in stock