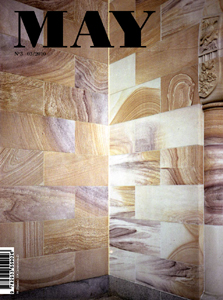 order
wishlist
Grève Humaine (Interrompue) – Fulvia Carnevale and John Kelsey in conversation / Caroline Busta, “Besides, With, Against, and Yet: Abstraction and The Ready-Made Gesture” / Dork Zabunyan, La Grande Parade / Paul Sztulman, What Is a Bad Exhibition ? / Chris Kraus, The Complete Poem / Julien Mahon, Lessons from Éric Rohmer / Dave Hullfish Bailey, CityCat, deflected in response to a system built up from under-examined details. 2 December, 2006 and 9 May, 2009, Brisbane River / Shaping, Structuring, and Editing the Past – Interview with Richard Hertz – Catherine Chevalier / Lili Reynaud-Dewar, Limited Edition.
Conceived as a collective space in which to develop thoughts and confront positions on artistic production, May magazine examines, twice a year, contemporary art practice and theory in direct engagement with the issues, contexts and strategies that construct these two fields. An approach that could be summed up as critique at work – or as critique actively performed in text and art forms alike.
Featuring essays, interviews, art works and reviews by artists, writers and diverse practitioners of the arts, the magazine also intends to address the economy of the production of knowledge – the starting point of this reflection being the space of indistinction between information and advertisment typical of our time. This implies a dialogue with forms of critique produced in other fields.
order wishlist
published in 2010
texts in English and French
17,5 x 24 cm (softcover)
192 pages (b/w ill.)
8.00 €
ISBN : 978-2-95355-902-6
EAN : 9782953559026
in stock
table of contents