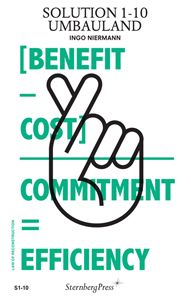 order
wishlist
After the end of the Second World War, the Federal Republic of Germany wanted to avoid a national “special path” at all costs. Even those who, since reunification, have called for a new patriotism merely mean to accomplish Germany's perfect normalization as a Western democracy. What they call for is not a profession of specifically German values but an abstract love for the country in which people happen to have been born and grown up. But now, as globalization advances and China rises to become the world's greatest economic power, the West's very existence is at stake. The union between democracy and prosperity has been broken; democracy is no longer the indubitably most effective evil. To remain competitive in the face of globalization, Germany needs unique and inimitable advantages of location, it needs to look for specifically German visions.

In Solution 1-10: Umbauland, Ingo Niermann devises ten provokingly simple ideas which would see Germany work it out after all, including a new grammar, a new political party, assigning allotment gardens to unemployed people and retirees, and the Great Pyramid, the tallest building of the world which would serve as a democratic tomb for millions of people.
Writer and journalist Ingo Niermann was born in 1969 in Bielefeld, Germany.
order wishlist
Design by Zak Kyes.
published in 2009
English edition
11,2 x 17,8 cm (softcover)
84 pages (10 b/w ill.)
15.00 €
ISBN : 978-1-933128-58-0
EAN : 9781933128580
in stock