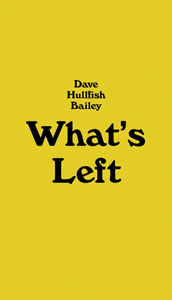 order
Using non-linear heuristic methods and experimental webs of information to draw links between the cities of Utrecht, and Slab City, California, USA, this book brings together speculative proposals that ask basic questions about public space, conceived as a physical and conversational sphere.
What's Left organizes research materials and speculative proposals relating to Bailey's recent project for Casco, Office for Art, Design and Theory in Utrecht, The Netherlands. The book resists traditional categorization, but could be said to present a highly experimental geography which begins with the role of hydrological processes in creating specific spaces of sociability and private retreat. Through this lens, it cross-correlates the historic city of Utrecht and “Slab City”, an ad hoc squatters' camp in the California desert. The mixed narratives of individual freedom and communal living associated with the latter find structural echoes in the wharves of Utrecht. These privately colonized public spaces are unique in the world, and exist only through an almost accidental intersection: that of the city's topography (it is one of the few larger Dutch cities slightly above sea level) and the collective task of managing the regional system of canals to protect low-lying areas (the “water boards” responsible for this task are frequently cited as the first form of democratic political organization in Europe).

Micro-sites in both places are further drawn together using non-linear heuristic methods to forge links across a range of subjects: The Rietveld Schröder House, history of the Colorado River and Imperial Irrigation District, sedimentation and accumulation, delta formation, water diversion structures, barricades as tools of spatial control, DIY culture, the social functions of books and libraries, etc. Additional essays by Emily Pethick, Jan Tumlir and Lars Bang Larsen examine the project and contextualize it against Bailey's broader practice.
In Dave Hullfish Bailey's complex installations he incorporates everything from photography, film, words, sand, grass and grain to drawings and ready-made objects. A turning point in his practice is architecture, especially modernist architecture, and alternative ways of using and creating utopian living structures. In his works Bailey often poses questions about the relation between natural and societal structures. Language and histories are emancipated and new potential social realignments are suggested. Narratives are joined together, expanded and condensed through non-linear systems, diagrams, complex webs, patterns and trains of chain reactions, reflecting the way in which it is impossible to form a singular or fixed viewpoint when social, political and cultural spheres, as well as language, facts and fictions are so inextricably connected.
order
Edited by Emily Pethick, Casco.
Texts by Lars Bang Larsen, Jan Turmlir, Emily Pethick.