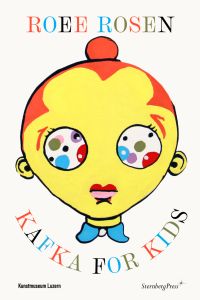 order
wishlist
Publication based on Roee Rosen's film Kafka for Kids, a cross-generic film combining a fiction drama with a documentary and a musical. The law as a central motif in Kafka's writings, and the fact that the film, supposedly, addresses children, lead to an exposition of the complex and troubling ways in which childhood is legally defined in the Palestinian occupied territories.
Roee Rosen's film Kafka for Kids is set as the pilot episode for a TV series that perversely aims to make Kafka's tale "Metamorphosis" palpable for toddlers. In its title, the film Kafka for Kids implies that the intellectual great of modern literature will finally be presented in a way that is generally understandable. Roee Rosen wants to present Franz Kafka, of all people, with his contorted thought constructions, in a way that is even accessible to kids! But unfortunately, that's not how things turn out: the star writer of the educated middle class is not simplified, but his story becomes much more complex, corresponding to reality, for reality is more complicated than we like to represent using biaxial graphs.
Featuring the original script of the movie, readers are invited to dive into a magical story, followed by essays that give a deeper insight in the literary aspects of Roee Rosen's oeuvre. A stowaway on the journey, Rosen playfully and with wonderful self-irony, does not negate the complexity of the present, but takes it to the next level by exploring how all things are interlinked. Rosen neither doubts the complexity of our reality, nor does he oversimplify to a fault.
Published on the occasion of the eponymous exhibition at Kunstmuseum Luzern in 2022-2023.
The paintings, films, and writings of Israeli artist Roee Rosen (born 1963 in Rehovot, Israel) have become known for their historical and theological consciousness, novelistic imagination, and psychological ambition. His work addresses the representation of history, the political economy of memory, and the politics of identity, often exploring the tension between trauma, horror, humor, and truth.
Rosen received degrees in visual art from the School of Visual Arts and Hunter College, both in New York. He now lives in Israel, where he teaches art and art history at Bezalel Academy of Art and at Beit Berl College. In 1997 Rosen's controversial exhibition “Live and Die as Eva Braun” at The Israel Museum, Jerusalem, was aggressively attacked by Israeli politicians. It won critical praise, however, for its new approach to the representation of the memory of the Holocaust. Rosen's projects include the exhibition “Justine  Frank (1900–1943): A Retrospective” (2009) and the films Two Women and a Man (2005) and The Confessions of Roee Rosen (2008). He has authored the books A Different Face (Shva, 2000), Lucy (Shadurian, 2000), Sweet Sweat (Babel, 2001), and Ziona™ (Keter, 2007).has invented
order wishlist
Edited by Sergio Edelsztein and Fanni Fetzer.
Texts by Sergio Edelsztein, Fanni Fetzer, Jean-Pierre Rehm.
published in January 2023
bilingual edition (English / German)
14 x 21 cm (softcover with dust jacket)
224 pages (88 color ill.)
29.00 €
ISBN : 978-3-95679-662-3
EAN : 9783956796623
in stock