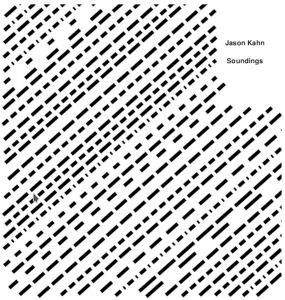 order
wishlist
A collection of 77 texts by Jason Kahn, each text written in response to a field recording made by the sound artist in Zurich in February-March 2020 (CD with the 77 sound recordings included): a poetic and sonic cartography that reflects the constitution of the place by the way it "sounds".
"I wrote the texts in this book as a kind of memorial device to recordings I made in Zürich between February 5 to March 22, 2020. Though not a direct reaction to the Covid pandemic, the transformation of the city due to restrictions of movement in the public space made these recordings only first possible in many ways.
Of course, what immediately became noticeable after the first shutdown of the city occurred was how quiet the normally noisy urban environment had become. It was as though a veil had been lifted between my ears and all the sounds that were normally hidden there. All of a sudden I noticed the birds singing, the sound of a paper wrapper skittering down the sidewalk in the wind, the new-found clarity of church bells ringing near where I lived, how footsteps seemingly exploded over cobblestones or the sound of a fountain, before just a hail of white noise, now resembling more a kaleidoscope of endlessly repeating rhythmic patterns.
I went out and explored the city anew, with microphone in hand and ears wide open. In the midst of so much tragedy, I was able to salvage something positive and also illuminating, regaining a sense for the audible space of a city I'd lived in for the last twenty years but had until now never really experienced at this level of acute detail and presence.
I never intended to do anything with these recordings. They were not made with the purpose in mind of using them as material in some composition or exhibition. It was just my way of dealing with a crisis situation and at the same time salvaging something positive out of all the pain and suffering. The recordings remained on my computer for another year when by chance I came across them again and started to give them a listen. Each recording held a wealth of memories which came rushing back as I listened. I was amazed at how intricate details, things I hadn't given any thought to for the last year, were suddenly there in front of me again, vivid and alive, as if they'd happened just a day or two ago.
I became fascinated with the resonance of my memory and started to write short texts in reaction to each recording, creating a kind of field recording of recollection. Each text draws out what I experienced in sound and feelings from its corresponding recording. There's often an intense focus on sounds but more intriguing I think are how these sounds had an emotional impact on my psychological and spiritual state, often triggering memories from as far back as my childhood. Writing these texts became a journey through a prism of memories, all starting with each of these recordings and sometimes just one singular sound.
The recordings I made are included here on CD to provide a basis of comparison for the reader, though I feel they're by no means necessary. Either the texts or the recordings could stand on their own, but placed side-by-side they provide an interesting juxtaposition for the reader to explore. It's not intended that the text or the recordings be read and listened to at the same time, however there is no prescribed method for experiencing this book. The reader should find their own way through these texts and sounds, just as I found my way through the city, following my ears as I made these recordings and tracing my memories back through time as I wrote the texts.
I hope this book inspires other people to explore their own living spaces and to consider how what they're hearing transports them to other states of mind or times in their lives."
Jason Kahn

"Jason Kahn reflects through text on seventy-seven minute snippets of urban field recordings on Soundings. An impression of plain language in terse and earnest diarism makes it difficult to tell whether words' consonance is accidental or intentional and relatedly the columned layout might manually redistribute the weight of words' cadence to mimic the broken percussion of natural sound or emphasize words and clusters of words if not simply an automatic product of the format just as the framing of the recordings—titles, durations, presentation—accidentally or not coaxes the ear to see meaning in otherwise unedited urban noisescapes. The semi-poetic text doesn't illuminate the specific context of sounds so much as the complex web of associations of location the author recognizes. The recordings are dense and muddy and ordinary. Recurring events like church bells, trams and trains, and salsas, magnetisms toward the om drone of refrigerator hum, industrial facilities' churn, and hvac units' thrum might manifest a sense of place in another listener. When the author says something like they can tell the age of the trains by the creak in their bones I think I can too. There is an empathy for timbral information and maybe a transference of their personal associations. The author mentions a memorial resonance and while this surficially refers to a personal experiential sustain it could also mean across minds in the shared memory of a globalized people with an urban condition."
Keith Prosk, Harmonic Series
Including streaming / download code and pdf of the book.

Jason Kahn (born 1960 in New York, lives and works in Zurich) is a musician and artist who grew up in Los Angeles, and relocated to Europe in 1990. His work includes sound installation, performance and experimental composition. Kahn has been exhibiting his sound and visual works since the late 1990s, and has had solo and group exhibitions internationally, including Townhouse Gallery of Contemporary Art, Cairo, Diapason Gallery, New York, and Centre d'Art Neuchatel, Switzerland. Originally a percussionist, Kahn later began integrating live electronics into his playing. As a composer, his work draws on electronic and acoustic sound sources to create slowly developing compositions imbued with a sense of timelessness. His work addresses the entity of sound as both a physical and psychological factor shaping our consciousness. Kahn's sound installations seek to enhance spatial awareness through sonic intervention, focusing on expanding our perception to other dimensions of seeing, hearing and feeling a space. Kahn has given concerts at various festivals, art spaces and clubs throughout the world, traveling and presenting extensively in Europe, North and South America, as well as Asia.
order wishlist
Graphic design: Jason Kahn. 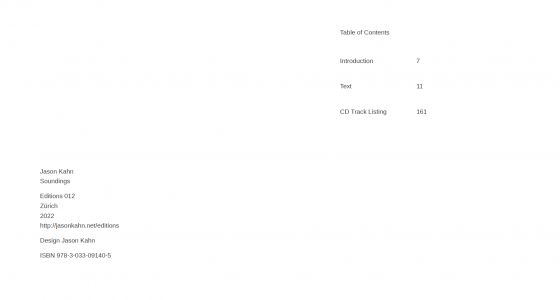 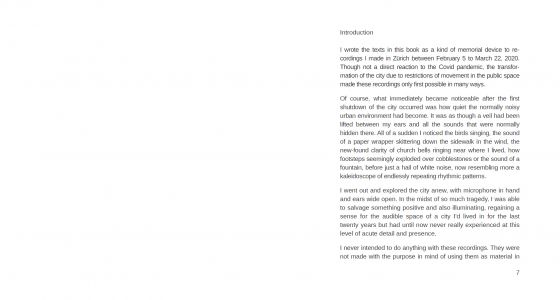 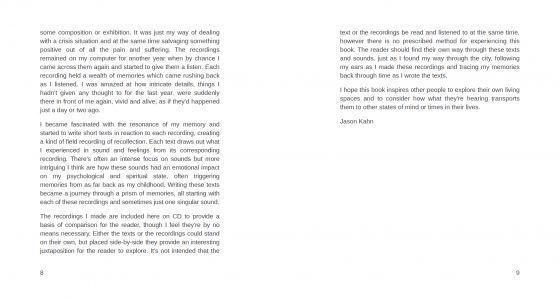 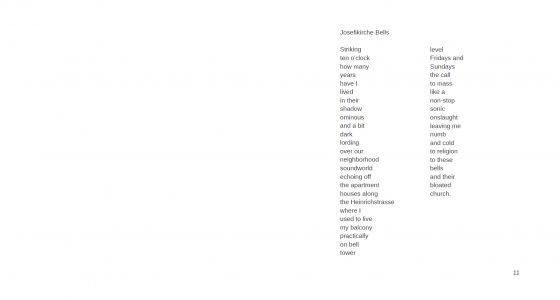 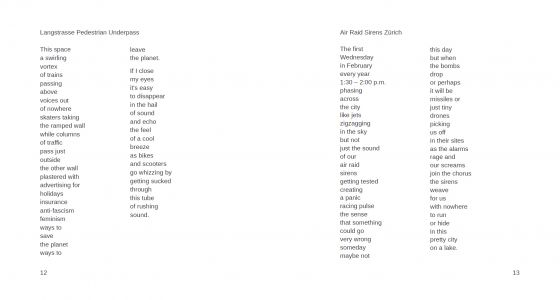 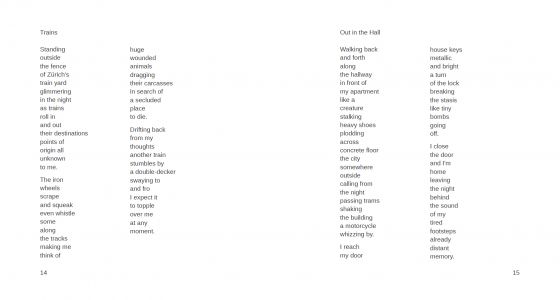 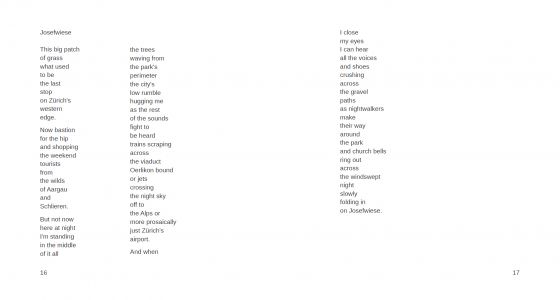 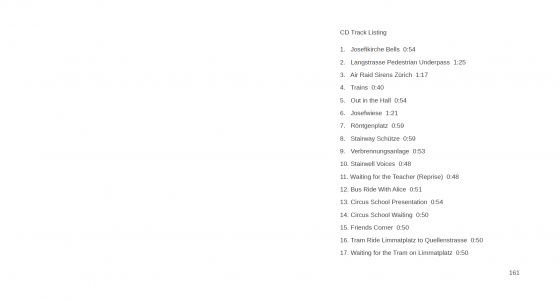 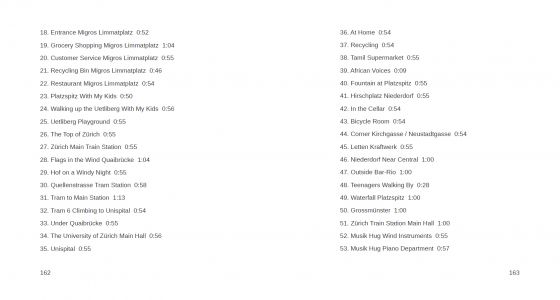 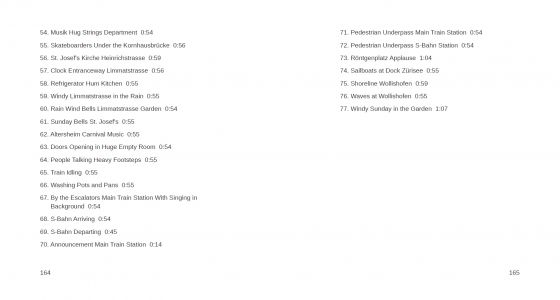 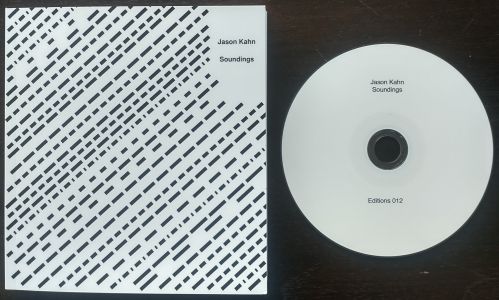