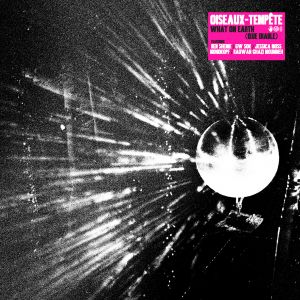 order
wishlist
With their sixth studio album, Oiseaux-Tempête unveils a new facet of its mythology through a dense work that carries darkness towards the light of day, that rumbles, calms down and warms up again. Like the silhouette of a lighthouse that reveals itself as its torch rises and shines, the powerful beauty of What On Earth (Que Diable) radiates into an expanding musical cosmos.
From the mammoth riffs of Partout Le Feu, progressively thickened by explosive sound textures and sirens ringing the alarm, we levitate on Terminal Velocity, a minimalist interlude with a crepuscular feel that is jostled by the hypnotic pulsations of Voodoo Spinning and then the call of the dungeon The Crying Eye - I Forget, an electro mystical trance that deploys its philters in a troubled moat haunted by the psalmodies of Radwan Ghazi Moumneh. The tempo speeds up in A Man Alone in a One Man Poem, a meeting of body and mind, of mechanical energy and burning breath where the spoken word of G.W.Sok sneaks in, before the pastoral crossing of Waldgänger and its forest of electronic chimeras. We dance naked under the comet, ridden by the whirlwind of piano and bass snaking over a drone before reaching the peak of this prophetic vision in Dôme, recorded live acoustic in Oscar Niemeyer's abandoned architectural complex in Lebanon. The echo of a last discharge before the collapse.
For almost a decade, Oiseaux-Tempête has been slipping through the cracks of any music genre or definition one tries to apply and perhaps it is because, like the wild and furtive creatures that escape all tracking, it disappears then is reborn under new forms, sketches playful mirages where we eagerly come to collide. Not quite a collective nor a conventional music group, Oiseaux-Tempête is more like the radioactive nucleus of an atom whose electron cloud is in constant mutation. At the center of this project, which blurs lines and genres, the duo turned trio of multi-instrumentalists Frédéric D. Oberland, Stéphane Pigneul and Mondkopf have been building dialogues between their own reality, their vocabulary, and those of fellow travelers met all around the surface of the world. From their Mediterranean trilogy (S/T, ÜTOPIYA?, AL-'AN!) to their forray into Canada with the explosive From Somewhere Invisible, deeply instinctive albums shrouded in mystery take shape, in parallel with feverish and incendiary live performances, punk in their urgency to tell the world by blasting the boundaries of space and time.
After having signed the soundtrack of the bewitching Tunisian film Tlamess (Sortilège) by Ala Eddine Slim in 2020, Oiseaux-Tempête immerses us with What On Earth (Que Diable) in a collapsed future. A psychedelic/psychological roadmap, the album gathers around Frédéric D. Oberland, Stéphane Pigneul, Mondkopf and Jean-Michel Pirès (Bruit Noir), the voices of Ben Shemie (SUUNS), G.W.Sok, Radwan Ghazi Moumneh (Jerusalem In My Heart) or the electric strings of Jessica Moss (A Silver Mt. Zion). If the planetary reality of 2022 looks like a bad spin-off of a pre/post-apocalyptic series, this new record invites us to another kind of anticipative present where the only weapons are poems chanted against the wind. Ben Shemie opens the projection on Black Elephant and sets the tone for this magnetic dance. With his modulated and processed voice, he spews his spoken word into a robotic and sensual monster on a modular synth loop slashed by heart beats and bursts of electricity, between futuristic hip-hop and a bad-ass addictive ritornello. A fitting introduction to the sensory deluge which follows and will have you spellbound, lost in landscapes both radically urban and deserted. Drum machines, analog synths, percussions, guitars, mellotron, flute, saxophone, vocals, rhodes, piano, violin and electric buzuk come to life in a sort of disaster aesthetic, pushing back the walls of the decor, against the current of any calibrated music.
Oiseaux-Tempête is a French musical band founded in 2012 by Frédéric D. Oberland and Stéphane Pigneul.
“In Oiseaux-Tempête, Frédéric D. Oberland and Stéphane Pigneul have chosen a name, a call from the sea, of almost totemic quality. First, perhaps, it offers the suggestion of journeys over great distance, the distant hymns of fortune-tellers and gravitydefying acts of the oracles. Yet at the same time, comes the idea of earthly chaos, a willing reference to the telluric frenzy that darkens the sky yet also, paradoxically, brings promise of a radiant tomorrow” (Alexandre François).
order wishlist
published in November 2022
21.00 €
EAN : 5411867335313
in stock