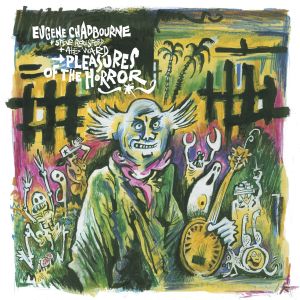 order
wishlist
An album for children about horror movies and monsters.
Bisou Records asked Eugene Chadbourne to do an album for children and he proposed an album about horror movies and monsters. Some references are obvious like "The Thing", "Blacky Lagoony", etc., and some are about strange characters like "Vampire Tiger Girl", and some are covers (Sam and the Shams, Shockabilly).
It's probably the best recorded album of Eugene Chadbourne. He met Steve Beresford and Alex Ward in London at Eastcote Studios (where Adele, Duran Duran, Aswad, Tindersticks and Depeche Mode recorded!). They used a good part of the instruments available there (grand piano, wood organ, many amps, loads of keyboards).
Eugene Chadbourne: Vocals, Guitar, Banjo, Dobro.
Steve Beresford: Grand Piano, Keyboards, Organ, Euphonium.
Alex Ward: Clarinet, Alto Sax, Electric Guitar.

Eugene Chadbourne (born 1954 in Mount Vernont, USA) is an American guitarist and music critic. Chadbourne grew up in Boulder, Colorado, and started playing guitar at eleven years old. After a few years playing in a rock band, he began to take an interest in jazz and avant-garde music and started to write about music. At some point, Anthony Braxton told Chadbourne to focus on music rather than journalism, which he did. To avoid military service during the Vietnam War, he moved to Canada in the early 1970s, then moved back to New York where he met John Zorn. The theme of the war will come back often in his songs and in his books. He devoted himself largely to free improvisation and released his first solo album in 1976 on his own label Parachute. In the early 80's, he founded the rock band Shockabilly with Kramer and David Licht. Playing guitar, dobro, banjo and even electric rake (instrument he invented), he navigates between musical styles: pop songs, Country & Western, free improvisations with many musicians of the contemporary jazz scene (Han Bennink, Anthony Braxton, Fred Frith, Alex Ward), covers of all kinds (Nick Drake, Ornette Coleman, and even Johann Sebastian Bach banjo!). He tours regularly in the United States and Europe, solo, duet with drummers (Jimmy Carl Black, Paul Lovens...) or in larger formations.
order wishlist
Cover art by JC Menu. 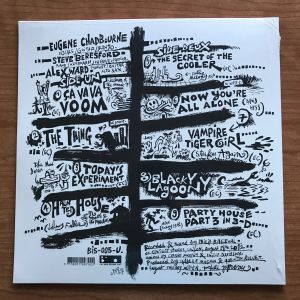