With a subversive sense of humor, Justin Lieberman (born 1977 in Gainesville, Florida, lives and works in NY and Munich) perverts and recontextualizes images from the media and pop culture in an attempt to undermine the organizational structures inherent in contemporary culture. Lieberman has long employed this sort of methodology, which in past bodies of work has played out through the recognizable systems of advertising, furniture design, outsider art, home shopping television, art conservation, corporate franchises, and taxonomic display to name a few. Favoring the handmade to the mass-produced, Lieberman transforms readymade images and objects, such as lottery tickets, newspaper clippings, and advertisements, by painting, collaging, and combining them in an unmistakable style informed by notions of excess and transgression. 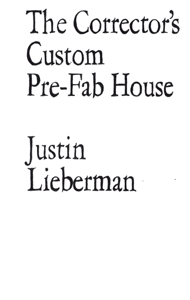 The Corrector's Custom Pre-Fab House
2015
texts in English and French
Art centers, museums, galleries & varia
A 300 page pulp book, compiling a series of 230 short texts by Justin Lieberman in alphabetical order, as well as an essay telling the story of a now-destroyed installation piece, to which the texts were originally related: “The Corrector's Custom Pre-Fab House”. The texts, with their sarcastic tone, can be read autonomously: they are a meditation on capitalism and material culture, between poetry, description and fiction. 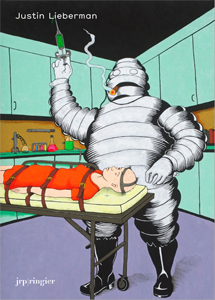