Over the past three decades, Carroll Dunham (born 1949 in Old Lyme, New Haven, CT) has developed an incisive stylistic form, which unfolds through all the various media he employs. In the 1990s, his claim to fame was a series of cartoon like organic figures engaged in a surreal battle of the sexes. At the turn of the 2000s, a single phallus-nosed character emerged, decked out in a formal suit and top hat; in the most recent phase of his creative process, the artist makes way for tree-shaped forms. 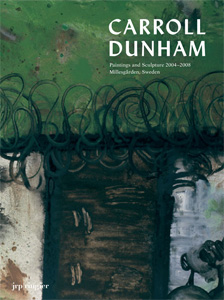 Paintings and Sculptures – 2004-2008
2008
English edition
JRP|Editions - Monographs
An overview of American artist's recent paintings and sculptures, exposing connections between the topics and his thematic development in a variety of media.