Born Des Moines, Iowa, 1969, Anna Gaskell lives and works in New York City. Her photographs are imbued with a sense of mystery, with the artist creating an aesthetic sequence that embodies ideas such as doubt, faith, fear, loss and sacrifice. The visual narrative is punctuated by fleeting glimpses of an event, brief moments in time of which the surrounding circumstances are not entirely revealed. Gaskell photographs her subjects as a close observer, but the resulting views are obstructed and the features cropped. The images are actively ambiguous on the part of the artist. Visions of psychological manipulation, indoctrinations, and other religious rituals permeate each scene. There is a discernable tension created by isolating a particular dramatic frame, and the artist leaves the viewer to interpret the situation being captured, as well as connect the narrative as a whole. 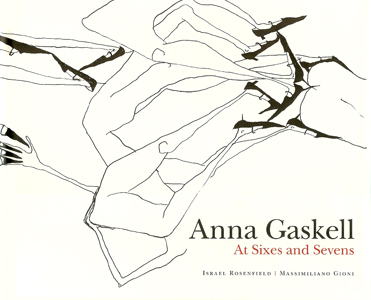 At Sixes and Sevens
2004
bilingual edition (English / French)
Yvon Lambert - Monographs and artists' books
(last copies available!)
A set of drawings and two series of photos by Anna Gaskell: a journey through the dreamlike and strange universe of the American artist.