After a classical art training, Evgenij Kozlov (born in Leningrad/St. Petersburg in 1955, lives and works in Berlin) became a member of the leading Leningrad avantgarde art group of the eighties "The New Artists". He opened in the late 80's the studio "RUSSKOEE POLEE/The Russian Field" on the Fontanka Embankment in Leningrad, which immediately became a meeting place of artists, international curators and journalists. He moved to Gemrany in 1993 and opened "RUSSKOEE POLEE/The Russian Field No 2" in an old factory in the historical center of Berlin with the photographer Hannelore Fobo. Again "The Russian Field" became a center for the Russian and international art-community in Berlin, and the size of the place gave the artist the possibility to further develop his artistic ideas on a large scale. Starting with the new millenium, Evgenij Kozlov shortened the name of his studio to the last two letters "E-E", to stress his absolute liberty in style. He defines the E-E (style) in a poem as follows: Select  / chic  / intelligent  / elegant / and harmonious / mysterious / in everything / and  / most / mportant, enig - / matic and / always / wise...  / closed, but  / more likely disclosed  / to those who understand  / and know the se - / crets of the unpredictably / wonderful art... 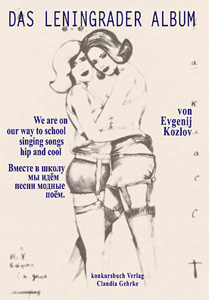