Monster Chetwynd (ex Spartacus Chetwynd, ex Marvin Gaye Chetwynd, born Alalia Chetwynd in 1973) lives and works in London. She is known for her baroque and surreal performances which, with great humour, bring together multiple image quotations from art history and pop culture.
In the tradition of the grotesque she draws on elements from Giotto frescoes, characters from works by Hieronymus Bosch, or Yves Klein's Anthropometries (1960) together with heavy metal musicians, Michael Jackson's music video Thriller, or the 1980s television series The Hulk, and creates a unified whole. As already in Appropriation Art, in which alien artistic sources have been acquired, Chetwynd holds herself responsible for all elements of her works.
As well as performances, Chetwynd, who graduated from the Royal College of Art with an MA in painting, produced a series small canvases under the title Bat Opera (2004 - 2005), which also present quotations from pop culture, but in addition feature more romantic borrowings. 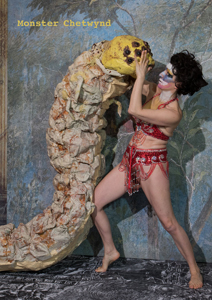 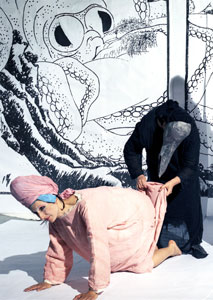