Designer, teacher and author, Victor J. Papanek was born in 1923 in Vienna, Austria. In 1939 after the Anschluss of Austria to Nazi Germany, he fled to the United States. Trained in architecture at the Cooper Union in New York, Papanek claimed to have apprenticed with Frank Lloyd Wright in the late 1940s and to have worked briefly with another Austrian emigre architect, Frederick Kiesler. Early in his career, he became a disciple and ally of Richard Buckminster Fuller, who wrote the preface to the first English-language edition of his larger work, Design for the Read World. Human Ecology and Social Change (1971). The book's innovative ideas and uncompromising critique of contemporary profit-driven design culture initially divided the design community. But over the years, this polemical work has become a huge success: translated into more than 20 languages and published worldwide, it remains one of the most widely read design books to date.
Throughout his career, Victor Papanek has applied the principles of socially responsible design in collaborative projects with graduate design students and local communities, working for organizations such as UNESCO and the World Health Organization. He has considered design as a political tool in recently decolonized nations as well as in peripheral communities in Europe and the United States. He has taught at the Ontario College of Art, the Rhode Island School of Design, Purdue University, the California Institute of the Art, the Kansas City Art Institute, among others.
In addition to the influential Design for the Real World, Papanek's publications (co-authored with James Hennessey) include Nomadic Furniture I (1973), Nomadic Furniture II (1974) and How Things Don't Work (1977). He is also the author of Design for Human Scale (1983) and The Green Imperative (1995).
He died in Lawrence, Kansas, in 1998. 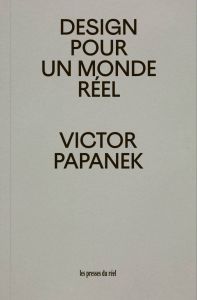 Design pour un monde réel
2021
French edition
Les presses du réel – Criticism, theory & documents – Design/Théories
Critical re-edition in French of an absolutely precursory and fundamental work for the inclusion of social and environmental issues in the design process: the manifesto of a radical reconfiguration of the field of design, of its forms but above all of its mission.