Frederick J. Kiesler (1890-1965) is an Austrian-American architect, designer, and theoretician. In both his architectural or written works, Kiesler attempted to achieve a symbiosis of artistic and social domains through interdisciplinarity. His major works include the monumental and spatial structure City in Space (1925), the Film Guild Cinema (1929) in New York and The Shrine of The Book (1959-1965) in Jerusalem. He is also the author of the Manifesto on Correalism in 1948. 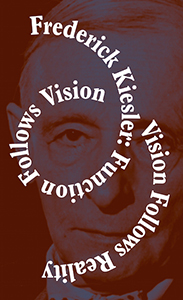