Ceija Stojka was born in 1933 in Austria to a family of Romani horse traders, the Lovaras. She was still a child when the nazi racial laws drove her into the hell of the concentration camps for 24 months. As a survivor, she covered up this trauma with a heavy silence for almost 40 years. In the 1980s, facing other tragic circumstances in her life, the denial of the Romani holocaust and the resurgence of extreme right-wing racist ideas in Austria, she felt an urgent need to testify. She wrote at first, then started to draw and eventually found her way by blending the two as a self-taught artist. She calls upon us, through her visions of childhood, to never turn a blind eye on what happened, and to remain vigilant as to what may emerge again. Ceija Stojka died in 2013 in Vienna. 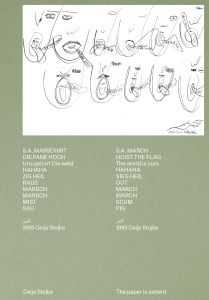 The Paper is Patient
2021
English edition
Paraguay Press
The work of Ceija Stojka (1933-2013) is considered today an invaluable testimony on the deportation and the holocaust of the Romani people during the Second World War. For the very first time, this publication considers equal to her graphic work the notes she wrote on the back of her drawings and paintings.