After graduating from ECAL in 2012, Swiss graphic designer Teo Schifferli joined the Maximage and NORM agencies before setting up his own office in Zurich in 2014. His style is distinguished by the mathematical harmony he establishes between images, color and typography. He has produced a series of books for the art and architecture space STUDIOLO in Zurich, published with Editions Patrick Frey. He has thus designed the graphics for six books that have won awards at the Most Beautiful Swiss Books Awards, as in 2016 for Legislating Architecture Schweiz. In parallel, Schifferli works with the Institute for the History and Theory of Architecture (gta) at ETH Zurich, for which he is in charge of visual communication. He also founded the experimental magazine Periodico with Marc Asekhame. 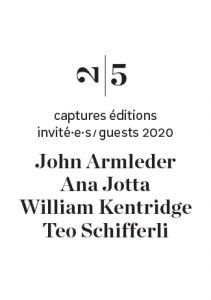