Pati Hill (1921, Ashland, Kentucky – 2014, Sens, France) left behind a litterary and artistic output spanning roughly 60 years . After a short but dazzling career as a model, between 1951 and 1962 she wrote a dozen short stories—several of which were published in George Plimpton's prestigious literary journal, The Paris Review—and five books which earned her real critical recognition. Hill published One Thing I Know in 1962 after giving birth to her first and only daughter. She was then forty-one years old, and would later claim to have decided at that time to "stop writing in favour of housekeeping.''
If it is true that she published no work for thirteen years, Hill continued to write: poems and a diary. She also opened an antique shop. But above all it was during this period that Hill began her first plastic experiments with a photocopier, which she began to use, untrained as an artist, as an artistic tool to explore the relationship between image and text. In 1974, Hill publishes a collection of poems with an unambiguous title, Slave Days, in which her first works appear: xerographs of household objects that seem to float in indistinct space. By using the copier—a machine that was stereotypically linked to secretarial work and thus to feminized labor—to trace everyday objects such as a comb, a carefully folded pair of men's trousers, or a child's toy, Hill develops an artistic practice that programmatically translates invisible domestic labor into a visual and public language. Through her use of this reproductive apparatus, she creates a model of artistic production that critically opposes the convention of individual expression as well as the supposed neutrality of technologically produced images.
At fifty, Pati Hill began a career as an artist which led her to exhibit in France and the United States, creating a considerable body of work, over nearly 40 years, made up of thousands of photocopies, texts and drawings. When she died in 2014, her complete archive was transferred to Arcadia University, Glenside, Pennsylvania.
Long ignored, the work of Pati Hill now enjoys new critical interest. It was the subject of a trilogy of exhibitions organized by Baptiste Pinteaux in 2021: at the galleries Air de Paris, Paris, Treize, Paris, and Ampersand, Lisbon. Hill's work was also the subject of institutional exhibitions the same year at Kunstverein München and Kunsthalle Zürich. A major body of her work, Alphabet of the Common Object, was presented in a group exhibition at the Whitney Museum, New York. 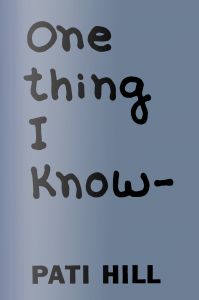 One Thing I Know
2022
English edition
Daisy editions
One Thing I Know is Pati Hill's third novel, first published in 1962, when she was forty-one and had just given birth to her first and only child. It is the last novel she wrote before claiming to "quit writing in favor of housekeeping". 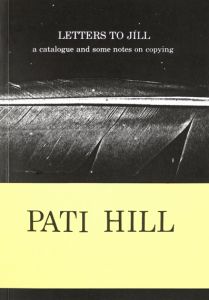 Letters To Jill – A Catalogue And Some Notes On Copying
2020
English edition
Mousse - Mousse Publishing (books)
sold out
The reprint of Pati Hill's 1979 book, composed of images and texts by Hill through which she intended to contextualize and explain her working methodology to Jill Kornblee, her New York gallerist.