Susan Te Kahurangi King (born 1951 in Te Aroha, New Zealand, lives and works in Hamilton) is the second eldest in a family of twelve children. Although chatty as a two year old, at the age of five, her ability to speak was in decline and by the time she reached seven, was a thing of the past. As King's inability to speak set in, so too did her heightened ability and commitment to draw. King's grandmother acknowledged and encouraged the four year old's artistic talent and at the age of five, soon after starting school, her teacher reported that Susan displayed remarkable mental activity in the creation of complicated figures drawn on paper, and that she was able to concentrate on drawing for hours at a time. At the tender age of seven, King was prolific and showed signs of talent as a young artist. In 1960, the family moved to Auckland so Susan could attend a newly established special school, which she attended for almost three decades. At some stage in the very early 1990s, King ceased her drawing practice. However, in 2008, fueled by renewed interest shown in her work, not long before the filming of Pictures of Susan (directed by Dan Salmon of Octopus Pictures Ltd, 2012), she picked up the pencil and began to draw, continuing where she had left off almost two decades prior. Less than a year after King recommenced drawing, she had her first ever solo exhibition at Callan Park, Sydney, curated by Peter Faye. King's exhibition history is extensive with representation in major art fairs, galleries and museums by prominent curators. She has featured in many exhibitions, events and publications in a range of contexts, both as an “Outside Artist” and a “Contemporary Artist”. These include; The Institute of Contemporary Art Miami, American Folk Art Museum New York, Intuit Chicago, Marlborough Gallery London, The Approach Gallery London, Andrew Edlin Gallery New York, Outsider Art Fairs in New York and Paris with Chris Byrne, Robert Heald Gallery Wellington, City Gallery Wellington, TSB Wallace Arts Centre Auckland and the Auckland Art Fair 2018. Susan Te Kahurangi King has works in a number of national and international collections including, The Philadelphia Museum of Art, the Museum Of Modern Art (MoMA) New York, The American Folk Art Museum New York, the Chartwell Collection (Auckland Art Gallery Toi o Tamaki) and the Wallace Arts Trust, New Zealand. 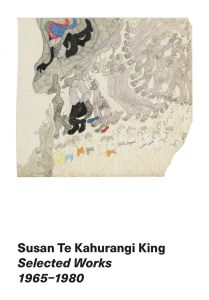