After finishing the Ecole supérieure des Beaux-Arts of Marseille, Anita Molinero (born 1953 in Floirac, lives and works in Paris) composed during her punk years her first sculptures, which made encounter salvaged objects and materials. “During my studies at the Beaux-Arts I painted but I was not very talented for sculpture nor for technique. I told myself therefore that the unknown of art certainly needed to pass by a confrontation to these subjects. It was a little very private manifesto, composed of denials, stating the conditions, which we impose ourselves in order to arrive to make something that would be new enough and would become a creation one day. […] Thus, I made mountains of little cardboard boxes that I varnished with wallpaper glue and then mounted on whatever was at hand, or trashbags that I filled with plaster and that I worked on with a wood die.”
Further on, she decided to add to the forms the power of an irreversible gesture for which she adopted plastic and a series of toxic materials that she cuts, burns, slashes, and sculpts. “[…] Since 1995, I love working with polystyrene that makes me think of sustainable materials such as bronze because you cannot get rid of it. […] I stop before the arrival of the formless and sometimes a work is finished before having even been started. A sculpture must stay a form and not to go into a formless state.”
Already in 1994 she took part of the exhibition Country sculpture at the Consortium of Dijon with Franck Stella, John Chamberlain, Robert Grosvenor, Carel Visser and Nancy Rubins. The FRAC Limousin in 2002, the MAMCO in Geneva in 2006, the FRAC Alsace, the FRAC Haute Normandie in 2009, the Consortium of Dijon in 2014 and recently the Museum Ettore Fico in Turin have dedicated solo shows to her work. In 2012 she was selected to create the tramway station of porte de la Villette on the line 3b of Île-de-France. In April 2015, she received the residency award of the Salomon Foundation in New York. Her works are in important public collections. 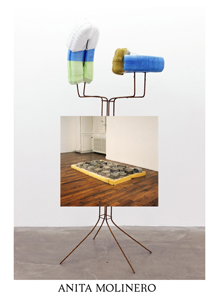