Exploiting spatial and time distortions, Bertrand Lamarche (born 1966 in Paris, where he lives and works) proposes a group of sculptural hypotheses that are at once ecstatic and conceptual. His work is rooted in the amplification and the potential for speculation of figures that have featured regularly in his oeuvre for nearly 20 years: the city of Nancy, Kate Bush, meteorology, giant umbellifers, revolving lights, tunnels, record decks. A large proportion of his oeuvre is characterized by a desire for subjectivation and appropriation, sometimes almost demiurgic, of various areas or figures of reality (The Rotor, The Model). Through modelling, the artist takes over these entities, developing a set of propositions that unsettle viewers because they are generated by looping (Looping, Interview with Kate Bush), or present a mise-en-abyme (Lobby, A Hole in the screen, La réplique, Tore), or result from a loss of reference points in space-time (Double Time House, Cosmodisco) and/or distortions in scale (Le Terrain Ombelliférique, Vortex).
Not necessarily employing video or mechanical means, his pieces evince a resolutely empirical approach to studio work whence the piece emerges in successive experimental phases through its intrinsic processes of realization. His is a formally complex and diversified corpus, including as it does installation (Le Paratonnerre, Map), photography (Vue du Viaduc John Kennedy, Théorie de la jeune fille), digital video (Le Terrain Ombelliférique), performance (Vortex), sculpture (Le Haut du lièvre, La Maison Cosmique), and audio pieces (Try Me). His works can be viewed as events or stages in a more global fiction/script that sanctions the permeability of the pieces between each other, as well as an organic form of genealogy. In this respect, the work on the Nancy site is significant for the rudimentary cinematographic processes it uses and for the series of successive scenarios it comprises, as in The Fog factory, Autobrouillard, Cyclocity or Methendal.
Nominated for the Marcel Duchamp Prize in 2012, his work has been shown in many institutions, including the Palais de Tokyo, the Centre Pompidou, the Pierre Bergé – Yves Saint Laurent Foundation, the Boghossian Foundation, the CCC, Tours, the FRAC Centre, the FRAC PACA, the Thread Waxing Space, the Anthology Film Archives, the Montreal Biennale… Authors such as Elisabeth Lebovici, Peggy Gale, Marie Ange Brayer, François Piron, Anne Lou Vicente, Gill Gasparina, Michel Metayer, Antonia Birnbaum, Philippe Duboy, Anne Bonin or Pascal Pique have written about his work.
His works feature in many collections, among which: the Fonds National d'Art Contemporain, the Centre Pompidou, the MAC/VAL, the Frac Centre, the Abattoirs in Toulouse, the Musée d'Art Contemporain in Rochechouart, Le Plateau / Frac Île-de-France, the Musée des Beaux-Arts in Nantes, agnès b., etc. 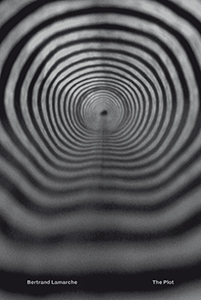 The Plot
2018
bilingual edition (English / French)
La Maréchalerie
The publication presents a series of works and two critical texts stemming from Bertrand Lamarche's project on the occult figure of Baphomet.