Georgia Sagri (born 1979 in Athens, Greece, lives and works in Athens and New York) is a pluridisciplinary artist. A founding organizer of the Occupy Wall Street movement, Georgia Sagri's social activism (alongside her artistic activities) dates back to 1997, when she was a member of the Void Network in Athens. Sagri has organized the perambulatory curatorial project “Saloon” and the audio-only magazine Forté since 2009. In 2013 she initiated the semi-public and semi-personal space Ύλη[matter]HYLE in Athens, with the mission to develop a new model for the contemporary work-life structure. She has exhibited and participated in documenta 14 (2017), Manifesta 11 (2016), Istanbul Biennial (2015), La biennale de Lyon (2013), Whitney Biennial (2012), Thessaloniki Biennale (2011), and the Athens Biennale (2007). 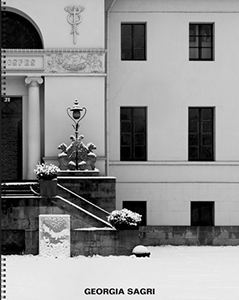 Georgia Sagri Georgia Sagri and I
2018
English edition
Sternberg Press - Monographs and artists' books
As her first comprehensive publication, this catalogue surveys the multi-facetted oeuvre of the Greek artist/social activist Georgia Sagri. Across performance, video work, and sculpture, she explores the murky relationships between the artist's body and her body of work, subjectivity and persona, original and reproduction with equal parts humor and severity.