Natacha Nisic (born 1967 in France) continually explores the invisible, even magical relationship between images, words, interpretation, symbol and ritual. Her work interweaves links between stories, accounts of the past and the present, to reveal the complexities of the relationship between what is shown and what is hidden, the spoken and the unspoken. Her fixed and moving images function as substrata of memory, memory torn between its value as proof and its loss, and are all statements about the status of images and the possibilities of representation. She exposed in France, Japan, Italy, Germany, Spain, United Kingdom, Korea and Argentina. 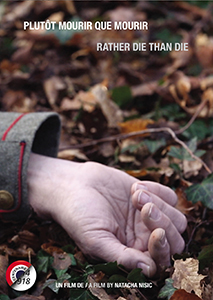 Rather Die Than Die (DVD)
2018
bilingual edition (English / French)
a.p.r.e.s editions - Documents & Video Works (DVD)
In 1918, art historian and cultural theorist Aby Warburg emerged from a severe episode of psychosis. At about the same time he gave a conference on the Hopi nation's ritualistic snake dance. Focusing on his bout with mental illness, the film melds the aftermath of the Great War with his hopes for eventually recovering.