Alberto Lattuada (1914-2005) was an Italian cinema director, screenplay writer and producer. After the end of the war, he focused exclusively on cinema, as assistant director for Mario Soldati on Old-Fashioned World and as a screenplay writer. Among his films, largely based on works of literature, there are The Mill on the Po, She-Wolf, The Overcoat, Tempest and La Steppa. In 1998, Lattuada left all his archive material to the Fondazione Cineteca Italiana in Milan, of which many years before he had laid the foundations together with Luigi Comencini and Mario Ferrari, saving a great number of old films from destruction. 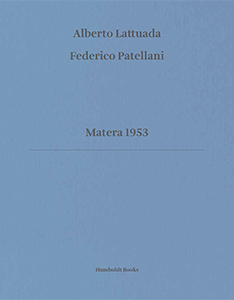 Alberto Lattuada, Federico Patellani
Matera 1953
2017
bilingual edition (English / Italian)
Humboldt Books - Time Travel
The troglodyte town of Matera in Southern Italy has fascinated generations of filmmakers since the Post-war area. Documenting the making of the 1953 film She-Wolf by Alberto Lattuada set in Matera, photographer Federico Patellani provides a unique insight of the life of the provincial city in the fifties.