Riccardo Baruzzi (born 1976 in Lugo, Ravenna, lives and works in Bologna) is an artist who uses mostly painting and drawing to conduct an investigation of the possibilities of representation, between figurative imagery and abstract synthesis. In recent years, with certain series like P. P. (Porta pittura, 2010) and Ordine (2014), he has also worked on the borderline between the material dimension of the painting, the “painting as object,” and that of the painting as a device of representation and narrative. Baruzzi's activity takes on different, interchangeable forms: painting, drawing, but also performances or installations, often overlapping challenge the univocal character of the art object. He has always accompanied his visual practice with research on sound, exploiting the physical structure of turntables and fabricating objects as instrument/works he uses in his performances to establish gestural and semantic affinities between drawing and rhythmical-musical composition, giving rise to a creative process of reciprocal aural and visual influences. 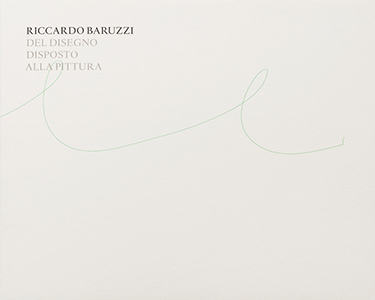 Del disegno disposto alla pittura
2017
bilingual edition (English / Italian)
Cura. - Cura.books
The first monograph on Riccardo Baruzzi, containing a selection of images of works made from 2010 to the present and writings by Alessandro Rabottini, Davide Ferri and Luca Bertolo. A perfect introduction to the italian artist's practice, which explores the notion of the unfinished and the provisional by way of an aesthetic investigation of drawing through the body of the painting.