Ricardo Basbaum (born 1961 in São Paulo, lives and works in Rio de Janeiro) is an artist and writer, investigating art as an intermediating device and platform for the articulation between sensorial experience, sociability and language. Since the late 1980s, he has been nurturing a vocabulary specific to his work, applying it in a particular way to each new project. Recent solo-projects include “The production of the artist as a collective conversation” (Audain Gallery, Vancouver), “nbp-etc: escolher linhas de repetição” (Galeria Laura Alvim, Rio de Janeiro), “Diagramas” (Centro Galego de Arte Contemporánea, Santiago de Compostela, 2013) and “Re-projecting (London)” (The Showroom, London, 2013). He exhibited at documenta 12 (2007). His work was recently included at the 20th Sydney Biennial (2016) and at The School of Kyiv – Kyiv Biennial 2015 (The House of Clothes, Kyiv). The artist was in residency at the Audain Gallery (Vancouver) in October 2014. He is the author of Manual do artista-etc (Azougue, 2013), Ouvido de corpo, ouvido de grupo (Universidade Nacional de Córdoba, 2010) and Além da pureza visual (Zouk, 2007). Professor at the Instituto de Artes, Universidade do Estado do Rio de Janeiro and Visiting Professor at the University of Chicago (2013), he was recently appointed as Professor at Universidade Federal Fluminense (2016). 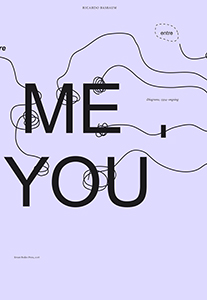 Diagrams – 1994-ongoing
2016
English edition
Errant Bodies - Critical Ear (monographs)
A publishing survey of the diagrams produced by Ricardo Basbaum in recent years. Both autonomous pieces or elements from installations, these diagrams act as interventional tools and visual poems that connect the literary and plastic spaces.