Patrick Bernier & Olive Martin have worked together since 1999, experimenting with forms as varied as films, performances, photographs and sound pieces, on a number of different projects, often in collaboration with professionals from other fields: lawyers (Sébastien Canevet and Sylvia Preuss-Laussinotte for X and Y vs. France: The Case of a Legal Precedent, Aubervilliers, 2007); storytellers (Carlos Ouedraougo for Quelques K de mémoire vive, 2003-2005, and Myriame El Yamani for Bienvenue chez nous, Residency album, Montreal, 2005); and an auctioneer (Steve Bowerman for Traceroute Chant, San Francisco-Paris, 2010). What they create are “monsters”, works where, through imprecision, hesitations and surprises, we become aware of the stratagems people willingly adopt to subvert their own language and form. This questioning of the individual's relationship to a territory of their own, a country, region or professional activity, is also the focus of their two films, Manmuswak (2005) and La Nouvelle Kahnawake (2010). In 2012, they created L'Échiqueté [“Chequered Chess”], a variant on the game of chess, which highlights the paradoxical situation of the half-caste in colonial history, as well as the ambiguous situation of the politically committed artist in the field of contemporary art. 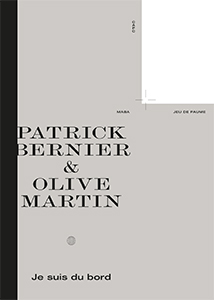