A primary figure among the concept-based artists who emerged in the 1960s and 1970s, Agnes Denes (born 1938, Budapest, lives and works in New York) is internationally known for works created in a wide range of mediums. A pioneer of several art movements, she is difficult to categorize. Investigating science, philosophy, linguistics, psychology, poetry, history, and music, Denes's artistic practice is distinctive in terms of its aesthetics and engagement with socio-political ideas. As a pioneer of environmental art, she created Rice/Tree/Burial in 1968 in Sullivan County, New York which, according to the renowned art historian and curator Peter Selz, was “probably the first large scale site-specific piece anywhere with ecological concerns.” 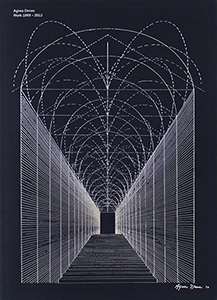