Claudio Cambon (born 1967 in the USA) has been a documentary photographer for more than 20 years since obtaining his undergraduate degree from Yale University, where he studied with Richard Benson, Jo Ann Walters and Stephen B. Smith. He also studied briefly at the San Francisco Art Institute with Linda Connor. He has photographed all over the world: in Italy and Germany, where his parents are from and where he has lived for various periods his life; across the American West, where he worked as a hand on cattle ranches; in Bangladesh, where he documented the last voyage, breaking and recycling of an American merchant ship; and in Mexico, where he photographed life in rural areas of the country. In the academic year 2011-2012, he began a long-term project about religious festivals in Bangladesh under the auspices of a Fulbright fellowship.
Claudio Cambon has exhibited, lectured, and been published and collected internationally; most recently, his work formed part of the Italy Pavilion at the 2011 Venice Biennale, 81 years after his grandmother and 101 years after his grandfather, both painters, last exhibited there. He divides his time between Bangladesh, the US and across Europe. 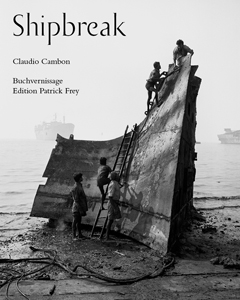 Shipbreak
2015
English edition
Edition Patrick Frey
A project by internationally working documentary photographer Claudio Cambon that tells the story of the last voyage, dismantling, and recycling of an American merchant vessel in Bangladesh in the late 1990's.