Suzanne Lacy (born 1945 in Wasco, USA, lives and works in Los Angeles) is a visual artist whose prolific career includes performances, video and photographic installation, critical writing and public practices in communities. She is best known as one of the Los Angeles performance artists who began active in the Seventies and shaped and emergent art of social engagement. Her work ranges from intimate, graphic body explorations to large-scale public performances involving literally hundreds of performers and thousands of audience members. She has published over 70 texts of critical commentary, and has exhibited in The Museum of Contemporary Art in Los Angeles, The New Museum and P.S. 1 in New York, and The Bilbao Museum in Spain. 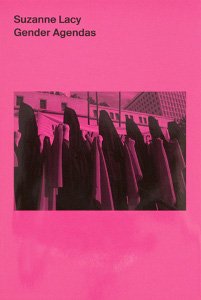