Djordje Ozbolt (born 1967 in Belgrade, has lived in London since 1991) is one of the best contemporary examples of an uninhibited approach to the venerable genre of painting. His prolific body of work, which also includes sculpture, could be defined by his witty take on representation and technique. It shows a vivid melting pot of styles and topics, ranging from the classical genres of portrait, still life, landscape, and historical painting, to Modernism and Surrealism. His extensive array of subjects spans religion, human relationships, exoticism—especially Africa—to travel experiences and cultural stereotypes. As illustrated by his playful titles, his pastiche, collage-like painting is not only that of an artist who wants to bring fantasy to art, but also his own way to raise contemporary issues, by creating audacious and eclectic images that question the reverence usually afforded to figures of authority. As Gregor Muir states: “Djordje Ozbolt's paintings appear to illustrate a long forgotten folk story or fable, visual depictions of distorted word-of-mouth stories. Ozbolt happily ransacks cultures, traditions, curiosities, and epochs–collapsing the narrative into a solitary image with their mysterious and often macabre imagery. Ozbolt's paintings resemble children's book illustrations that have been removed by a particularly prudish censor.” 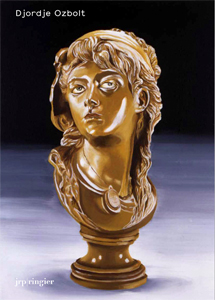 untitled
2014
English edition
JRP|Editions - Monographs
First monograph on Serbian born London based artist Djordje Ozbolt's painting, including an essay by Irish art critic and curator Caoimhín Mac Giolla Léith, as well as a conversation with Gregor Muir, Director of the Institute of Contemporary Arts in London.