Elizabeth Peyton (born 1965, lives and works in Long Island, NY) is a leading contemporary painter, best known for her portraits of artists, musicians, historical figures, and a few athletes. Peyton grew up in Danbury, CT and studied at the School of Visual Arts in NYC and continues to live and work there. In 1993, her second solo exhibition in a room of the Chelsea Hotel, which featured images of famous historical and literary figures, opened to great critical acclaim. Her later portraits of rock stars and other public figures have been hailed for their expert use of color and design, and for their evocative, descriptive qualities. Recent works depict her friends and close relationships, as well as prominent figures from art and cultural circles.
Her work has been exhibited at the Museum of Modern Art and the Whitney Museum of American Art in New York, and at the Centre Pompidou in Paris. 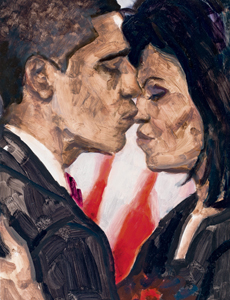 The Age of Innocence
2013
no text
Nieves
sold out
Artist's book (12 paintings by Elizabeth Peyton).