After producing many videos and films, Swiss artist Jérôme Leuba (born 1970 in Geneva, lives and works in Geneva and Berlin) has built a substantial corpus of “living” artworks entitled "battlefield." As such, these works create or describe zones of tension by employing codes of representation that challenge the meaning these images might bear. His battlefields do not only address zones of power conflicts, but also the very personal struggles we might experience when confronted with his scenarios. For instance “battlefield #19/if you see something say something” (2005) takes the form of a simple intervention in public space: a piece of luggage left inconspicuously in a corner of the museum, an act that since 9/11 has lost its innocence … Many of Leuba's works are thus dealing with anxiety, collective feelings, and mass behaviors. 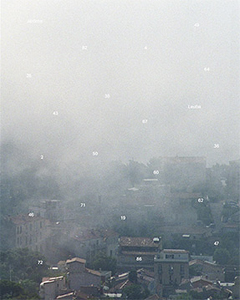