In a pivotal period, the geological and gravitational landscapes of Eduardo Tomàs Basualdo (born 1977 in Buenos Aires where he lives and works) call to mind the present-day transformations of our environment. His works tend towards a contemporary sublimeness which flirts with the apocalypse.This Argentinian artist bases his approach on the Earth's universal and natural cycle, which he appropriates in order to give it its own, autonomous force, over which human beings do not seem to have sway. He confronts us with the amazing black mass of a rock, abandons us to the trap of a mysterious watery landscape, puts us in front of objects—a glass of water, a knife, a candle, and the like—and mock-natural elements which move of their own accord. The narrative quality of a sculpture which encompasses the place of its presentation, its dramatic configuration, and an uncertain and suspended time-frame for the work are all recurrent motifs in the artist's work, which underscore the extent to which, since the 1960s, the oeuvre has become less a space of representation than a space of experience.
After becoming known in the last few years in Latin America (Argentina, Brazil, Colombia, Mexico, Uruguay), Eduardo Basualdo's work has recently been shown in Germany, Spain, the United States, and France. 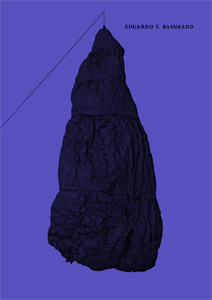