The oeuvre of Christophe Berdaguer & Marie Péjus (born respectively in 1968 and 1969, live and work in Marseilles and Paris) is made up of many different procedures which engage the spectator in the direction of a perceptible and psychological experience of space.Forms borrowed from history, inner images, mental projections, but also chemical substances, olfactory atmospheres, systems of influence and conditioning, interplays on altered states of consciousness... It is in the blind spots of modern utopia that the Berdaguer & Péjus twosome sets itself up, by reappraising, not without irony, the challenges of a “pathology” of bio-power over bodies and consciousnesses, based on an uninhibited form of interference between history, experience of reality, and (science-)fiction. In regularly seeking out the collaboration of scientists, from particle physics to linguistics, Berdaguer & Péjus play to the hilt the game of an experimental art, whose hypotheses rub shoulders with certain historical references, at the crossroads of social reformism and a modernism whose repertory of forms refers first of all to a series of empirical procedures and protocols to do with the split between project (concept) and reality (behaviour). 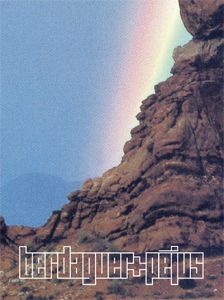 Berdaguer + Péjus
2012
bilingual edition (English / French)
Analogues - Monographs
Reference monograph: a retrospective of psychic landscapes and architectures created by Berdaguer & Péjus in the past 15 years, with two essays and an interview.