In his work, Yorgos Sapountzis (born 1976 in Athens, lives and works in Berlin) appropriates public space and the statues, monuments, and memorials that inhabit it. The artist concentrates less on their historical-political meanings and much more on their function as a medium of recollection. Sapountzis consciously tries to ignore historical information about the sculptures and instead allows them to “speak” through their gestures, poses, and ornaments.
Like an anthropologist—or parasite—Sapountzis hunts the urban, figurative myths by night or sounds them out for days on end with his camera. He then stages a confrontation, a dialogue, and a “dance,” in which the preceding expedition is consolidated to form a theatrical choreography. Sapountzis drapes scarves, makes plaster casts, and builds constructions out of aluminum rods and tape, ensnaring his stone or bronze protagonists, whom he tries to involve in his seemingly futile, exhausting activities. His video camera also records this action. The performance is therefore just as much part of the artistic strategy as the video material produced during the performance. 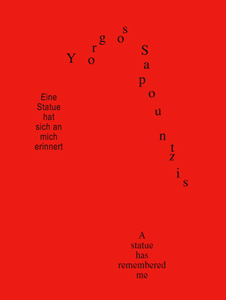 A statue has remembered me / Eine Statue hat sich an mich erinnert
2012
bilingual edition (English / German)
Sternberg Press - Monographs and artists' books
An in-depth survey of Yorgos Sapountzis' work in ten chapters from 2000 to the present.