Since 1994, Xavier Noiret-Thomé (born 1971 in Charleville-Mézières, France, lives and works in Charleville-Mézières and Brussels) has been building up a corpus of paintings of remarkable diversity, that draws on both experience and acquired knowledge. “You always paint what you are,” says Xavier Noiret-Thomé, illustrating his point with a reference to Pollock and Cézanne. “I take everything: history, memory, cinematographic forms as well as specifically visual ones, and in a space-time that is not linear but elastic.” Xavier Noiret-Thomé's conception of painting is anything but puritanical or absolutist. He welcomes it both in its “grandeur” (its history, its tutelary figures) and for its “weakness” (its impurity, and even its triviality). The art of Xavier Noiret- Thomé is at once figurative and abstract, iconophile and iconoclastic, high and low, contemporary and untimely. It combines all kinds of media, from acrylic, lacquer and spray to chrome, ink and the addition of objects such as coins, mirrors and nuts and bolts, sometimes veering off into the creation of protean sculpture-objects. Xavier Noiret-Thomé sees the development of his painting in terms of telescoping and collapsing forms. Perception of the work can never be linear. Rather, the beholder is confronted with a complex, unstable development that ventures outside categories, determinisms and comfort zones. 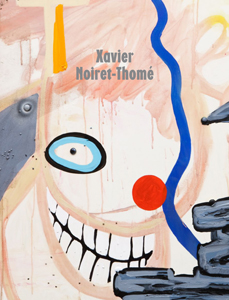 untitled
2012
bilingual edition (English / French)
Analogues - Monographs
First monograph dedicated to Xavier Noiret-Thomé's pictural telescopings, between figuration and abstraction, between iconophilia and iconoclasm, between references to art history and borrowings from contemporary popular culture (with two essays and an interview).