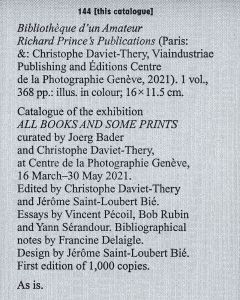 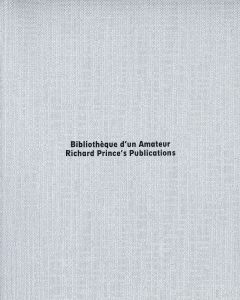 order
wishlist
An inventory: Bibliothèque d'un Amateur. Richard Prince's Publications takes a look at Richard Prince's library and production of artist's books published between 1980 and 2020.
This book is not a proper catalogue raisonné, but rather an invitation to browse the library of an amateur's. It allows us to consider this important aspect of Richard Prince's work, addressing books as well as the notion of a collection and its incompleteness, revealed here by the "ghosts" of missing books. Richard Prince is an avid book designer and collector; this zeal and fervor transpire in many book works where he photographs books from his collection, transforming a publication in an infinite library.
New expanded edition of the book first published in 2014 (ISBN 978-2-9539347-5-5).

Published following the eponymous exhibitions at Palazzo Collicola Arti Visive, Spoleto, and at Christophe Daviet-Thery, Paris, in 2012, and the exhibition "All Books and Some Prints" at Centre de la photographie Genève in 2021.
American artist Richard Prince (born 1949 in Panama Canal Zone, lives and works in New York) recycles found materials from American popular culture, most often images from advertisement and magazine photography which he re-photographs, silkscreens, overpaints, frames, enlarges, or arranges in collages, playing with their somehow empty meaning. Citation, détournement, appropriation: any possible treatment of these clichés is explored and played with.