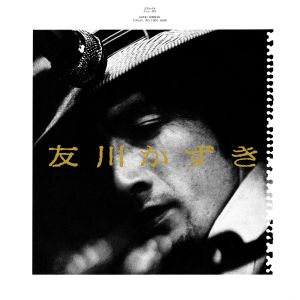 wishlist
Vinyl reissue of Kazuki Tomokawa's seminal album (1975), that introduced one of the most singular voices of the post-war Japanese music scene.
At the tender age of twenty-five, while he was working part-time at an Italian restaurant in Tokyo's Kamata district, Kazuki Tomokawa released his debut record, fittingly titled Finally, His First Album. While he had already penned hundreds of songs, including his first single "Try Saying You're Alive!," written on a long train ride past fields and rice paddies, it was this recording that introduced Japan to one of its most unique musicians of the postwar era. Each track, as record label exec Kiichi Takahara writes in the LP's liner notes (here translated for the first time), is not a song but a "flesh-and-blood human being," birthed by the singer-songwriter and the raw, guttural cries that would become a hallmark of his incomparable sound.
1970s Japan was a time and place marked by a profound desire for authenticity amidst the onset of television and media saturation. Tomokawa arrived on the scene as a musician with"the personality of a hydrogen bomb," to borrow a phrase from his frequent collaborator Toshi Ishizuka. In an unwieldy interview included here, members of the notorious leftist band Zunō Keisatsu (Brain Police) put it bluntly: here was a man surrounded by the "disingenuous," the "wishy-washy," and the "superficial," who was delivering "real life, unvarnished." These songs are lullabies for the lost, staring not into the void but—as the fourth track declares—from inside it.
Finally, His First Album is the first of three Tomokawa records to be reissued by Blank Forms Editions in conjunction with the US release of Tomokawa's memoir, Try Saying You're Alive!, the first-ever English translation of his writing. This debut captures the self-assured trademarks that Tomokawa would hone over the course of decades. Multiple tracks are performed in his native Akita dialect, a distinct and highly regional vernacular of northern Japan seldom heard outside the prefecture—and even more rarely heard in music. Tomokawa's lyrics locate profound interiority in the rituals of everyday life, and are sung against sparse folk arrangements of tender, lilting chords—a prelude to the rock and electronic stylings to come in later years. A self-proclaimed "living corpse," Tomokawa wallows, whispers, shouts, and cries, yet still, through his existential doubt, asks to be heard.
Blank Forms · Kazuki Tomokawa - Finally, His First Album (excerpts)
Kazuki Tomokawa (born Tenji Nozoki in 1950 in the Akita Prefecture area of northern Japan) is a prolific Japanese musician, singer-songwriter, artist and poet, one of the pioneers of acid-folk, active on the Japanese music scene since the beginning of the 1970s, companion of musicians such as Kan Mikami, Keiji Haino or Motoharu Yoshizawa. He has recorded more than thirty albums.
wishlist
2022 (publication expected by 2nd quarter)
forthcoming