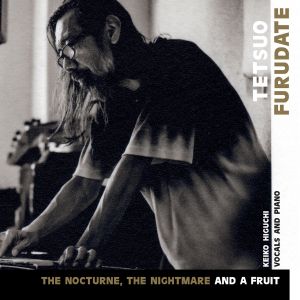 order
wishlist
Tetsuo Furudate's new album, featuring Keiko Higuchi and Olga Magieres.
Tetsuo Furudate has been working on projects including electronic music, films, videos creating time passages between old and new pieces, re-reading the past through re-appropriations. All his recent pieces can be watched or just listened to. It is also a cultural mix embracing all eastern and western cultures (from JS Bach to Merzbow). Here he recreates a borderless and timeless universe, where voices and pianos reach emotional moments of great depth. The whole is driven by Tetsuo Furudate who, by a continuous mixing, conceives these different pieces as an editor would a film made of borrowings images, archives material and unpublished fragments.

Keiko Higuchi is above all a pianist and performer, linked to jazz and improvisation. She was revealed by Love Hotel (2008), her concerts are like real performances, she is considered as one of the most singular and impressive performing artists of her generation.

Olga Magieres, Russian pianist living in Denmark, specializes in improvised music and the syntactic relationship of languages. She has already collaborated with Tetsuo Furudate in 2010 with Introduction Of Blue Of Noon, her first opus Piano and Poetry had been praised.
Tetsuo Furudate (born in Tokyo) started his career in experimental film and video art in 1981, then he started music and performing art. Attached to the very first generation of the "japanoise" scene but developing an unclassifiable work, he was first the collaborator and friend of Zbigniew Karkowski in Japan, together they created some of the most radical but complex pieces under the name of "World as Will" (after Arthur Schopenhauer's book), some of which were rewritten for the viennese Zeitkratzer Ensemble (received worldwide attention when they created and performed a new version of Metal Machine Music by Lou Reed—including Ulrich Krieger and Anton Lukoszevieze).
order wishlist
published in October 2021
14.50 €
EAN : 5411867115212
in stock