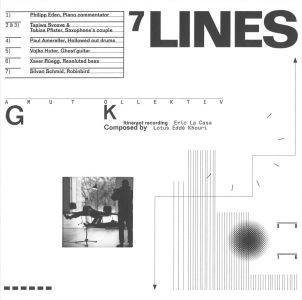 order
wishlist
A heterophonic musical piece for performative concert, composed by the choreographer Lotus Eddé Khouri.
"When a group of musicians asked me, a choreographer, to write them music, I knew that by accepting their proposal we were all agreeing to change up our conceptions of our respective disciplines. We were ready to broaden our ways of thinking and to dare to do something that none of us was comfortable with. I could take advantage of this freedom to work on what I've wanted to do in dance for a long time: a polyphonic piece, or rather, a heterophonic one. 7 lines is a performative concert that brings seven distinct logics on stage all at once. Assigning each instrument a specific role prevents the heterophony from sinking into psychology by maintaining the piece as a process of production, and by bringing the instrument and the tool together as well as the musician and the artisan. Each musician's part has just as much to do with the sound to be produced as his or her presence and gestures on stage. Consequently, the audience as much a spectator as a listener."
Lotus Eddé Khouri
With Philipp Eden (Piano commentator), Tobias Pfister & Tapiwa Svosve (Saxophone's couple), Paul Amereller (Hollowed out Drums), Vojko Huter (Ghost'guitar), Xaver Rüegg (Resoluted Bass), Silvan Schmid (Robinbird).

Lotus Eddé Khouri is a French-Lebanese choreographer and dancer. She works on performances, shows and videos where dance, always reduced to its simplest form, is combined with other practices and situations, both daily and singular.
order wishlist
Composed by Lotus Eddé Khouri.
Performed by Gamut Kollektiv.
Recorded and mixed by Eric La Casa.
Mastered by Taku Unami.