INTRA! INTRA! – Towards an INTRA SPACE 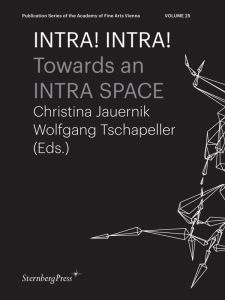 order
wishlist
Thinkers revisit INTRA SPACE, an artistic research project that experiments with the substances, constructions, and manifestations of our bodies.
"INTRA SPACE: The reformulation of architectural space as a dialogical aesthetic" explores how interactions between, across and beyond humans and nonhumans can be experimentally embodied, aesthetically reformulated and theoretically challenged in their spatial, temporal and transversally entangled spheres. The project examines the hypothesis and potentials of INTRA SPACE, a spatial transposition of the theoretical concept of "intra-action" introduced by philosopher, theoretical physicist and feminist scholar Karen Barad. Her philosophical framework "agential realism" views the world as dynamic, relational structure in which intra-actions function as boundary making, material-discursive measurements in the unfolding of matter and meaning. By proposing "a new understanding of how discursive practices are related to the material world", Barad profoundly shifts concepts of identity, agency, matter, space and time, thereby also challenging contemporary thought in architecture. Her ontological reconceptualization "… there is no inside, there is no outside. There is only intra-acting from within and as part of the world in its becoming" presents a potential pivot point for the understanding of relationships between the human and the nonhuman as mutually co-constituting each other. INTRA SPACE produces a transformative, differential and resilient space of emergence where apparatus, human bodies and digitally constructed figures become diaphanous to each other. A sensorium for embodied experiences, where architectural processes coincide with bodies of the apparatus, the virtual, the engineers, the visitors, the machines and cameras—bodies are constantly updating sites of construction. The experimental framework critically looks at the potentials of both, the digital and the human, to mutually enhance their functionality, their exposure in artificial and real spaces, their social interaction and self-perception. It offers a technical and conceptual infrastructure, a transformative disposition for equal encounters between digital, machinist and human sensoria. The resulting differentiated perspective, spanning from a single point of touch to a sensory space, negotiates the body in motion as immediate perceptive entity in relation to its surroundings.

INTRA! INTRA! details an ambitious and provocative project that explores human and posthuman forms of agency within a context of spatial research. The project situates itself around developments in artificial intelligence and technical advances in the mapping and creation of nonhuman subjectivities in relation to the presence of human and nonhuman bodies. The book develops forms of spatial occupation that are not a simulacrum of human movement, but suggest whole new forms of spatial practice and the everyday interactions that might occur between human and nonhuman bodies, and poses profound questions around how a future architecture could be developed and inhabited by a vast spectrum of possible citizens.
Nic Clear (University of Huddersfield)

This book is about a space-being, and its in actu engendering. It is an idea of space that frees itself from anchorage in originality. It seems to be a space without roots, engendered ab initio coexistentiae—starting with the shared condition of coexistence. Instead of an origin, there is a "self" to this space-being. INTRA SPACE is the space where a centrifugal motive is at play. Is there an architecture that can contain its dancing movement? It would need to be an architecture capable of receiving and hosting—accommodating—the giving in of a "self" to an act of inverted inhabitation—a public kind of inhabitation that does not appropriate and consume space, but engenders it. INTRA! INTRA! points ways towards a kind of ideation that links the domain of the digital with a public space. Such ideation is of urgent relevance today.
Vera Bühlmann (Vienna University of Technology)
order wishlist
Edited by Christina Jauernik and Wolfgang Tschapeller.
Contributions by Fahim Amir, Clemens Apprich, Esther Balfe, Gabrielle Cram, Dennis Del Favero, Ursula Frohne, Christina Jauernik, Vicki Kirby, Hannes Mayer, Diane Shooman, Susanne Thurow, Wolfgang Tschapeller, Birk Weiberg, John Zissovici.